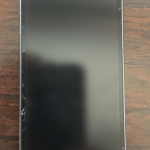 So having an iPod Touch 5th Gen for several years now, without any falls, drops or abuse. Then one afternoon, doing yardwork and listening to the ipod (via Bluetooth ISOtunes earbuds), the [roduct slips out of my pocket and in slowmotion, I watch it hit its corner on a hard surface (sidewalk).

(some would argue “why no cover or sleeve/case?”. Why indeed! To make it bulkier? Thicker and not able to reside in a shirt pocket? Exactly. Apple made this from glass (it will break) and aluminum (it will dent/ding/scratch), for the reason that the consumer will replace it…with another iDevice).

Caveats: have to use the Sandisk USB cable to charge/transfer songs. Some USB Micro cables don’t have all the pins needed.
It forgets the BT setting (its on, it remembers the device, but it does need a reminder-click through and make sure).
A song stopped playing so there may be a file issue (MP4/FLAC/MP3)

For $50, I can put up with those. But for Apple, slowly but surely, I am weening off your expensive, inaccessible-designed fruit.